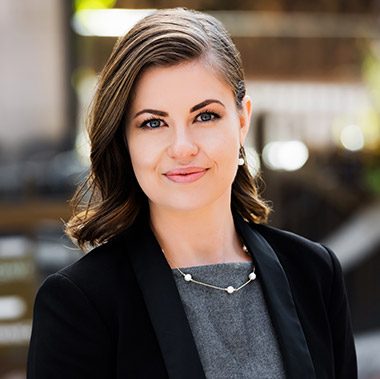 Ms. Coulter joined Fischer, Brown, Bartlett, Larsen & Irby, P.C. in the fall of 2018 after a year-long clerkship with Chief Judge Hartmann in Water Division One.

Whitney earned her bachelor’s and master’s degrees in journalism, and her first job at a newspaper – The Greeley Tribune – brought her to Colorado. Following in her brother’s footsteps, she decided to go to law school and attended the University of Denver Sturm College of Law.

During law school, Ms. Coulter was fortunate to be part of several inaugural water law courses and served as an Articles Editor on the Water Law Review. She worked with Cynthia Covell and Alyson Scott to co-author “Update to A Survey of State Instream Flow Programs in the Western United States,” published in the Water Law Review in Volume 20, Issue 2, in the Spring of 2017.

Ms. Coulter was also a member of the National Appellate Advocacy Competition Team at DU. She worked as a student attorney with the Environmental Law Clinic and as an intern with the 19th Judicial District and with the Weld County District Attorney’s Office.

Whitney’s interest in water law stems from growing up on her family farm in southeastern Idaho. Her father, a fourth-generation farmer, grew potatoes, wheat, and beer.

For more information, call us at (970) 407-9000, or send Ms. Coulter an email at whitneyphillips@fischerbrownlaw.com.