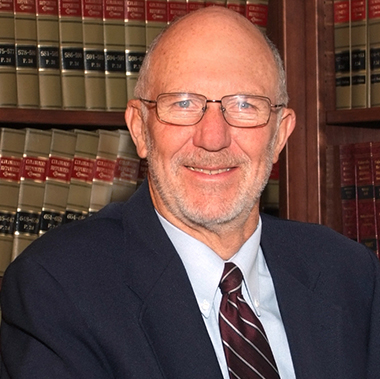 Mr. Brown is “of counsel” at Fischer, Brown, Bartlett, Larsen & Irby, P.C. Following active duty military service (Captain, judge advocate, USAF), Mr. Brown has practiced law in Fort Collins since 1969, with an emphasis in water law and related matters. Mr. Brown has extensive experience in water court litigation and has appeared as a speaker or panelist at various conferences regarding water law related topics. Over the years, he has participated in numerous water rights and water quality matters that have had statewide significance.

Throughout his career, Mr. Brown has been actively involved in the water law community. He is currently on the boards of the Northern Colorado Water Conservancy District and Municipal Subdistrict, and is the Subdistrict’s vice president. He served as the South Platte River Basin’s representative on the Colorado Water Conservation Board, 1998-2000, and served as chair of that body.

He was a member of the South Platte Basin Water Roundtable from the time of its founding until 2007. He has been involved in the affairs of the Colorado Water Congress since 1979. During the early 1980’s he was a member of the Water Quality Advisory Committee of the Larimer–Weld Council of Governments. Mr. Brown has taught and lectured regarding water law at Front Range Community College and Colorado State University. He has been president of the Larimer County Bar Association, and was awarded that organization’s “Professionalism Award” in 2000. He has served on both the Board of Governors and the Executive Committee of the Colorado Bar Association.